All comments welcome; and, welcome as additions to the site:
hatterscabinet@gmail.com

A 'Best Of' post from the Best of the Poetry Daily Critique page.

First lines:
He plays to the violet walls,
to the window’s curly brown shadows

A couple of days ago VerseDaily offered us another ekphrastic poem. As I have said in an earlier post (here), ekphrastic poetry has always intrigued me. When done well there can be very interesting energies created between the poem and the work.

This poem is an engagement with Modigliani's work The Cellist. This post will be wholly exploration: intending only to prompt ideas as to the nature of ekphrastic poetry, this poem, and of ideation of poems in general. (Though, some critique will be unavoidable.) Let me put in an image: 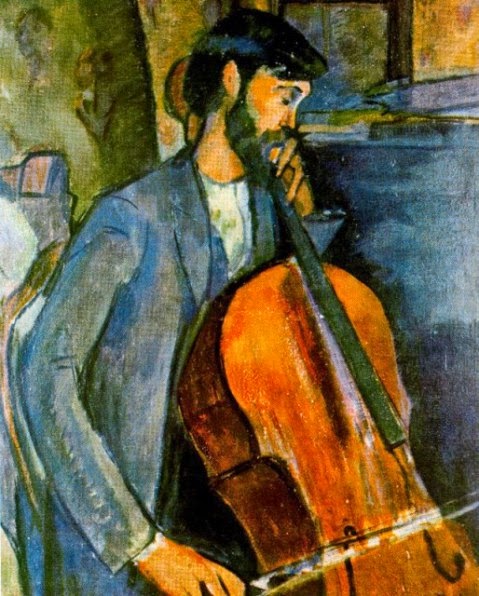 I want to work this by talking abstractly before pointing to the text of the poem. So, let me open with a question: Is the poem too skimpy? Does it not work as well as it might because it relies too heavily upon the work? An ekphrastic poem is meant to be an engagement with a work of another medium, but it still must be a poem. There has to be ideas and energies generated within the poem that are beyond the ideation of the subject art work, or the poem is not doing anything beyond using many words to say "look at that painting."

Yet, let's approach the same question from the other side. What of a poem whose aim is not to self-exist but only to service the artwork, as though it were criticism of the painting but told in poetic language. ("Criticism" here being understood as opening of a text for engagement by others.) Would such a poem need to work on its own for it to be a success? I would say no, it would not. Except, the purpose of the poem is no longer that of engagement with the medium of words: the words now serve not for the "pleasure of the text" but for explication and understanding. What is being written is no longer a creative work, but non-fiction in poetic form. So, Lucretius, or Pope's Essay on Man. There is some room for play within the poem, but the primary purpose of the poem is to point the reader not at itself but at the subject art-work.

For me, good ekphrastic poetry is good because it satisfies the first requirement of being good poetry, and holds that requirement above the effort to engage a work of art. I can speak of efforts on my own part that began as ekphrastic but, in the effort to make a successful poem ended up breaking away from the art object. In such a case, it is no longer "ekphrastic" as much as it is "spurred by" the work of art. For me, the best ekphrastic poetry works even if you have never seen the artwork – even if you did not realize it was ekphrastic. And then, when you do see the art work, the relationship between the two brings new energies to both.

Which prompts an "advanced class" question: if a poem can succeed brilliantly without knowledge of its ekphrastic nature, is it ekphrastic? I can take Pound's first Canto (which is about Odysseus's Journey into Hades and the shade of one of his sailors) and put it into engagement with this painting by William Bradford (Whaler's Trapped by Arctic Ice)

and have both give energies to the other. But that does not at all make it exphrastic, obviously. There has to be an engagement that is both intended and specific: both to the text of the poem and to the art object.

But, if I acknowledge that intended and specific relationship, am I wrong in saying that an ekphrastic poem must be self-sufficient? And if I say that, am I admitting that ekphrastic poetry will always be a weaker form of poetry?

Personally, I'm not willing to go there. That idea to me speaks of a poetry that is more like Lucretius: more creative non-fiction (a phrase I use but, to be honest, it makes me laugh) than creative; it speaks more of a text that is nomic than aesthetic. And, the avoidance of the engagement collapsing toward the banality of mere "description" seems the very art of ekphrastic poetry – and the difficulty of it.

I like the line "someone has made him feel tender, brutal": to me it is the most successfully ekphrastic line of the poem. But is the poem doing anything with that line beyond merely stating it? That is, while it may speak in engagement to the painting, does the line work within the creating of a successful poem. That is, is that line, when it comes to it, the whole poem?

I want to point out two points specific to the writing for questioning and pondering.

1. Second stanza. Is the "that" a mistake? On one level, is it simply a better line? Compare the difference between the two:

But on another level, is the "that" a mistake syntactally? There seems to me a shift in focus between the first two stanzas. The first stanza is "He plays": describing a scene of a man playing cello in a room. Without the "that," the second stanza would be a continuation of that focus: describing a man in a room; describing the engagement between the ideas of the man playing and the room. But with that "that," the poem forces a shift of focus from man-in-room to colors-of-room. The man has suddenly been jerked out of the context.

2. Final stanza. Is it a problem that the author uses "quiver" in the last stanza? That is, does the combination of "bow" and "quiver" pull into the poem the idea of archery where it is not at all wanted?